I have been receiving a lot of questions and enquiries about my involvement or rather lack of in Mrs. SA this year; as well as my lack of participation in Mrs. SA events. A lot of stories and narratives have been doing the rounds and I thought to clear the air in my words and on my platform.

I had the honour of being titled/crowned Mrs. SA 1st Princess 2016/2017 in October 2016 and I took this duty and service to this title very seriously. This was for me a platform to represent not just young married women of South Africa but the young black and brown girl with no voice and who felt disenfranchised. And Mrs. SA being a woman empowerment programme (which they themselves have constantly led with as a tagline of sort), I thought would support and lend my voice towards this to steer the social conversation and the everyday narrative of SA women.

Black and brown girls are the most underappreciated in our society and it is through platforms such as these that we (the winners or titleholders) rise and then lend an ear, take things to the drawing board, then lend our voices towards the change we want to see… So, I thought.

During the year leading up to the crowning, the black ladies who were participants faced a lot of struggles, one of them being hair and makeup. Considering the fact that this is a pageant and you are judged on the way you look, this was very stressful.

We were in a woman empowerment programme that essentially was a pure beauty pageant. So, the reality was that beauty was and is front and centre of it all. Of all elements in the lead up, 25% was empowerment on an actual level and 75% was beauty and all physical appearance.

We had a makeup sponsor whose foundation barely matched the black girls, some even looking slightly greyed. The Mrs. SA CEO was called aside on numerous occasions to address this and one of the solutions was that the ladies needed to bring their own foundations to shoots, events and appearances we were obligated to be at. Having experienced this and the same with the hair struggle (as I competed with my natural hair throughout the journey and then opting for an afro-like weave for the finale); I was hoping to see some change post the finale and a more transformed approached – considering this is a MRS pageant in democratic South Africa.

Come February 2017 and the announcement to the titleholders of new sponsors – I requested some clarity of the terms of working with the new sponsors considering these were sponsors introduced post the finale and were not included in the contractual obligations we signed post-finale/crowning. Thereafter, in a meeting between myself and the CEO I highlighted my concerns to her, including the fact that the makeup brand was not inclusive in their catering for black and brown girls – how am I expected to advocate for a brand that excludes the majority of the population. I am Mrs. SA 1st Princess, I advocate for SA women – one would expect inclusivity in all my advocacy, right?

Since raising these concerns and numerous others, I have found myself set aside from the Mrs. SA agenda. And have equally decided to step aside and perhaps allow those who don’t have an issue with the way things are run to participate in peace.

I do feel though that the pageant industry in SA is lacking real transformation. The fact that the bottom-line comes before the participants that you are ‘attempting to empower’ is for me a concern. We once again touch on the boarder of the disadvantaged at the mercies of the privileged and this cycle never ends. It will never end.

Hopefully these and many other issues that the CEO knows I have spoken to her about may be amended and in the future every woman competing will compete on an equal and level starting point.

Might I also add that though MRS SA is a private company, one of the biggest stakeholders are women, and in particular black women because of the country’s demographics.

I understand that many of these SA pageants are owned privately and that they are not obligated to answer to any external stakeholders, but my concern once again is the use and exploitation of the South Africa name without the accountability and inclusivity that it should hold.

The pageants end up propagating ideals that lead to many young black and brown girls feeling dissatisfied and ashamed of their physical appearances, feeling rejected, unwanted or that they need to alter who they are to form part of a mold that is not designed for them.

We need to be cognizant of the young girl who has white friends flipping through magazines that already propagate white as the ideal beauty standard and seeing the eye shadow palettes, foundation shades and lipstick shades not look good on her tone of skin (that were not designed for her, mind you) now feel that she lacks in beauty because she cannot see any representation in any form.

If we are to have products, brands and pageants in South Africa, we need those that are willing to introspect and look at how they are devaluing the physical and mental pain they put on women of colour whilst devaluing black beauty. There are multiple definitions of beauty – not one.

In 2007, Naomi Campbell came together with other black models to pressure the modeling industry to address racism. It took them decades of building their career to do so. Younger and fresher models that speak out are labelled as the ‘angry black girl’.

But at the end of the day, we need to consider the following: In a country with more than 80% of the population being black and brown, the industry with the most power in setting society’s standard of beauty, has made it difficult for black and brown girls to feel beautiful. 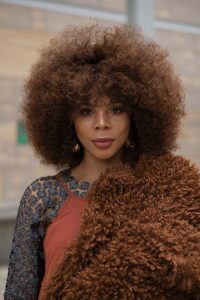